Take a look at the image below. 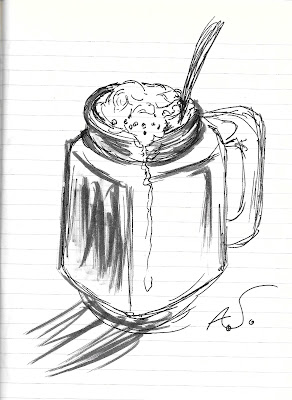 This mocha latte was dripping in whipped cream from a Sunday brunch with a fellow author friend and future collaborator. All the while talking about our current endeavors and watching waiters, I felt some need to sneak out my ruled Moleskine journal.... to draw it. She even took the sketch to her Instagram page!
And the latte was drunken within an hour. My loyalty to coffee has no limit.
Look again at the ruled lines on the picture. Even more so, what and how it was drawn. My Moleskine journal is often saved for the unsolicited thoughts of my artistic path within a day to a week, not for rough 5- 15 minute sketches with ink only. And yet, that's what has been going on for the past four weeks! This latte was just the beginning; my BART and MUNI rides to work were about to become much more... inky.﻿ 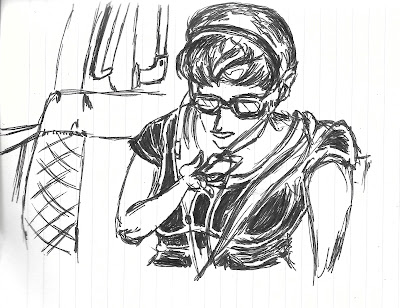 The process started on a Tuesday. One thing's for sure; if I'm drawing someone a seat away from me, I tend to keep my eyesight four seconds on target. Sure, glasses allow me to hide my eyes thanks to a pair of lenses on a single frame, but consider having to look UP every few seconds! That's the real challenge.
Many of you who have been following me for quite sometime know that I'd rather start a sketch with a Col-Erase pencil and iron out the details later with an inkpen and brush pen. Something about carrying around this thinly veiled journal etched one thought into my brain:
Don't think.﻿ 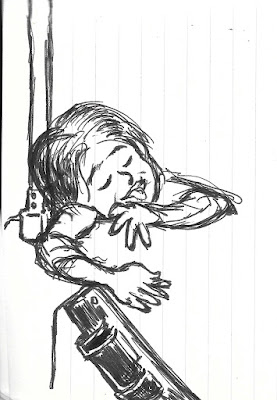 Ten minutes later, I entered a MUNI train and sat parallel to a preschooler and her nanny. What you see above is a culmination of drawing kids; they never stop moving. She was pretty exhausted by the time I finally caught her pose! ﻿ 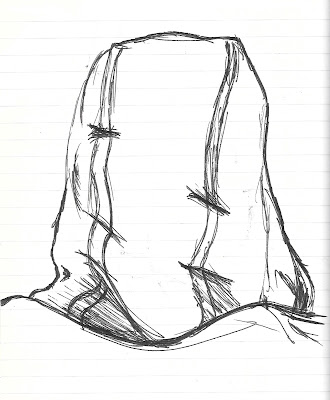 Next day, a mysterious figure walks onto the BART. Outside of her skateboard and overly buttoned backpack, I couldn't tell you anymore about this woman. One thing's for sure; I refused to darken in the hood. My ink reserves itself!﻿ 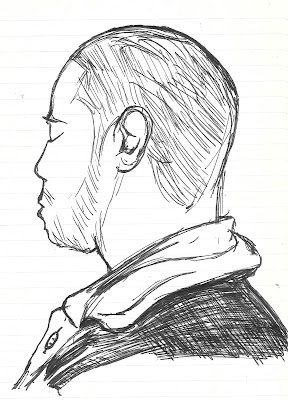 On the adjacent path from my BART seat on the same ride, this side profile started out on a contour line basis. There was a chance to use all of the page for his dozed-off newspaper reading, but a close-up worked just fine. Since I wanted to indicate the different material on him, hatching was used for his hair and cross-hatching for his jacket. Again, saving ink. ﻿ 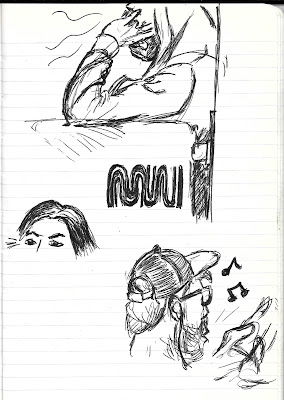 This three-part page took place on the MUNI train a half hour afterwards. Anything that puts my cone of vision to the test I'll happily accept, especially when they're more than nine feet away! All of that said, and the hooded figure on top gave off his tired and irritated vibe on my sketch of him. Doing quick studies of people in public is a good way to work on your psychiatric training, hence how I was able to catch the second face to the left. The sun was in her eyes once we hit West Portal (I think). As for the last figure, I'll just go on a limb and say that he was going to the beach that day.
Here's my final piece, with a somewhat different approach. 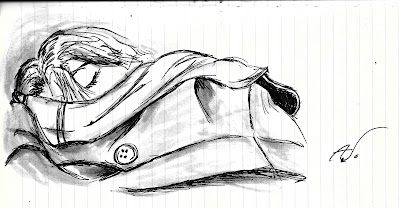 It was the Saturday morning before Valentine's Day, and folks were already recovering from Super Bowl City with an entourage of hearts and red clothing. Unless, you were like me and you were going to work. Based on the all-black attire this sleepy head was wearing, she probably couldn't bear to think of the imminent pain to endure until that coffee break. Oh, and my cone of vision was only two feet away! The brush pen was used thanks to that; outside of the clothing folds, I wanted to focus on the shading since the image began to abstract in my brain as I was reaching the Montgomery station.
The portrait party has come to an end for now, but the Moleskine journal still has a little life in it for a few more. Somewhere on the table, my mixed media sketchbook is dancing due to its inevitable return. Who knows? Maybe I'll make room in my bag for both! 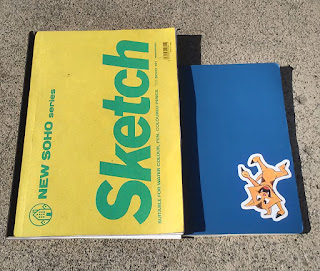 It all started with a simple task: a certain date named St. Valentine's Day is upon us and I figured it'd be a fun idea to draw a couple of postcards based on SolForce. The only two I thought of were Geraldine and A.C. As I fleshed out the compositions more, something became obvious to me; they were both drinking their favorite beverages. Geraldine sticks to her rabbit inhibitions and downs some carrot juice on her way from the farmer's market, while A.C. smirks after buying his first (out of five) latte macchiato's within his workday.
Here's a secret: I pictured A.C. with a Kojak- esque voice in the colored version. 'Who loves ya, baby?'
These two pieces led to six more card designs with RaiStar Twinkle, John Clue, Martha Clue, Revenda Delgatta, Stephanie Monroe, and Essa and Aamoco Gerbil with some form of their favorite food or beverage drinks. This was the purest opportunity to test out a marketing plan that can reach all year round instead of only February. I titled it I Heart Sol!

The official logo!﻿
﻿
Without further ado, here are the original eight chosen for this test!
﻿ 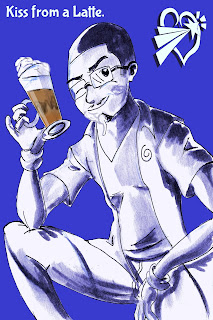 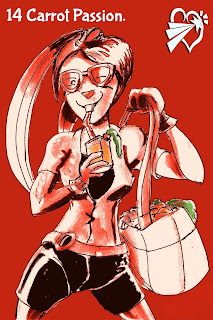 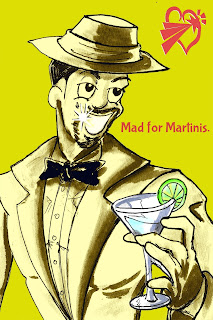 John Clue and a Martini 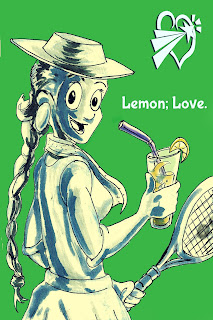 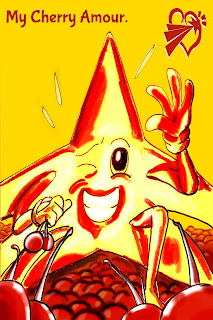 RaiStar Twinkle and Cherries (lots of them) 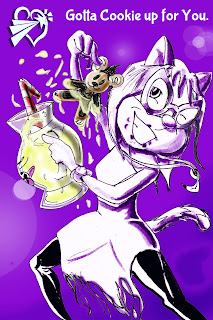 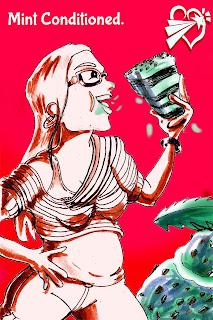 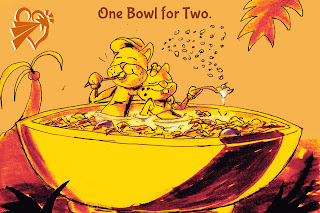 Essa and Aamoco Gerbil and a Bowl of Cereal
One day over the week, I'll make these available as a package to order! Seeing them on a screen is great, but physical postcards with cartoon characters loving food is too tempting to pass up on.
Till then, have a great week and stay Sol-ful! ﻿ 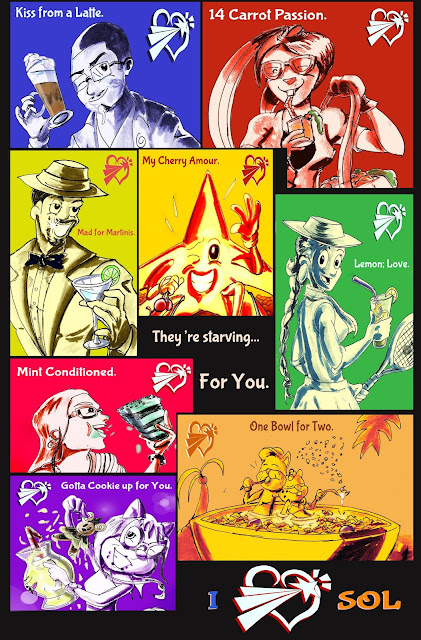 Posted by Aaron Southerland at 10:29 AM No comments: