Really, Who's This Guy?


So last week, I created my first post for my first blog. To say the least, I'm proud of myself for following my mental duties! I spent the first post loosely introducing myself and what I stand for (patience and comedy, mostly). However, this week I want to focus on introducing what I am and what I do. Remember the picture that was at the end of my first post? Allow me to reiterate: 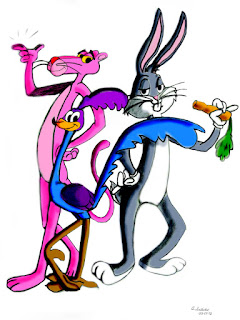 Yes; I draw cartoons! To be more specific (or artsy), I'm a cartoonist who specializes in character design, story boarding, and gradually 2- D animation. I created this visual a few months ago as the first in a project I'm temporarily dubbing Prelude to the Sol. This will be a series of character drawings based on the cartoons that convinced at the tender age of 5 that I needed to begin creating my own cartoons. Road Runner, Bugs Bunny & the Pink Panther are my guys; if it weren't for them, I probably would've been a "normal" kid! As a preview, I may be drawing out Darkwing Duck, Yakko, Dexter, and Mojo Jojo in my next visual. It all depends on when the current project is done...


Now make no mistake, animated cartoons are my passion. BUT... that doesn't leave out video games! For the past few years, I started to notice the surge of gaming's popularity not just within the entertainment value, but the artistry behind it. I'll rant more about the general public's view of this later in June, but I should go on. Much like these three in animation, many video game characters inspired me when it came to my own. Kirby is the main one! Pokemon also helped out a bit. And then in March, I drew this: 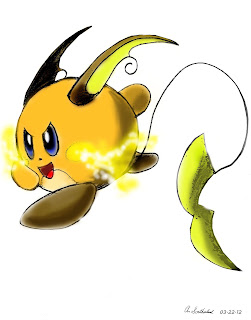 For those who need to know what this is exactly, I fused Kirby, a character who absorbs others' powers & appearances with the Pokemon Raichu. It was one of my most popular pieces among my social circle & it led to me thinking that a "Kirby + Pokemon" project was at hand. So next week, I will expose my completed pieces of Kirby's Pocket Monsters! Trust me; more are on the way.

And now, for the grand finale of the week. Some of you may be wondering one or two things: "Umm Aaron, these are great & all but... where are your characters?!" or "What does Sol in Prelude to the Sol mean?!" The answer to both of these? 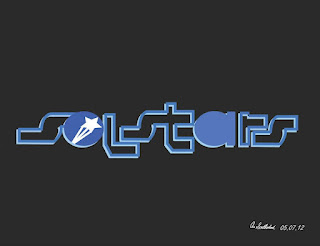 Here we go! This is the logo for my cartoon series, Solstars. When I said I've been drawing since a young age, I wasn't kidding. Many of my characters, settings & stories have been created between my first grade year & my freshman year in college. Ever since, they've been developed more & I'd like to think that they've matured too. ;)

Whenever someone asks me to summarize the main storyline: I tell them this: Solstars is a crime comedy that takes place in Sunshine City, U.S.A., a utopian city with retro sensibilities in the present day. It's an island- based metropolis south of the Atlantic Ocean that's powered by the elements of nature & their treasures given to the city by its worshiped Phoenix spirit. Everything goes accordingly in the city... until a bunch of potential villains seek out to steal the treasures in order to turn the tides of the city onto their own & take control. 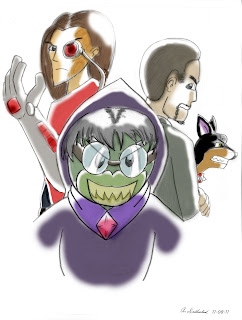 The three who invented the term villainy to the city!

This meant that the city's government had to enlist a crime fighting unit to assist the cops (of course!) through episodes they can't deal with alone. Enter: 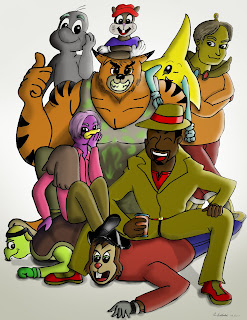 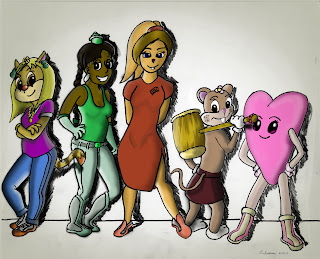 The Sunshine SuperToon Services! This is what I consider the "Original" lineup of the group. In two weeks, I'll begin to go more in detail with the characters & how their backgrounds serve a purpose in the story.

So there you have it. The three current projects I'm working on are touched upon! Next week, Kirby's Pocket Monsters! will be shown, Prelude to the Sol will be continued... soon. XD And more Solstars posters, visuals & even animations (*gasp*) are being planned. Here's a preview of two. 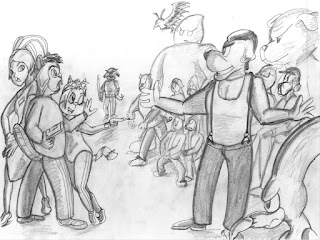 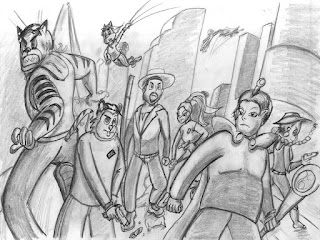 Until next time, folks!

Posted by Aaron Southerland at 8:27 PM No comments: