If I were a betting man, I'd put at least 24 of my best watercolor pencils down on how many artists of every kind use that naming process! For the sake of this post, allow me to explain.
During my year of creative reincarnation, -2013 for those interested- I spent many a day and week in bookstores, cafes, and libraries. I could've stayed home on Google Images and Tumblr blogs to find whatever fix I needed to recreate my SolForce characters or at least push their ready- made designs from years prior, but fresh air and sunshine does this introvert well! One Wednesday that August, I drew this picture out: ﻿ 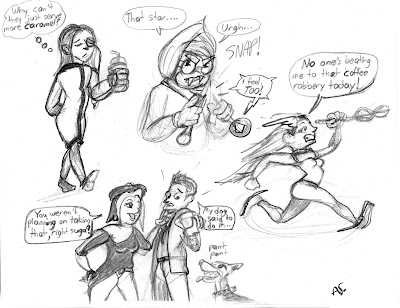 Four of the villains I've been drawing consistently for at least twelve years prior to 2013, but there is ONE figure that seemed to have come right out of the blue during that sketch session: the one running to the right with wings sprouting from her hair.
This character would go on to be drawn as a full design a month later and she was named Marcy Silver, also known as "Mercury!" 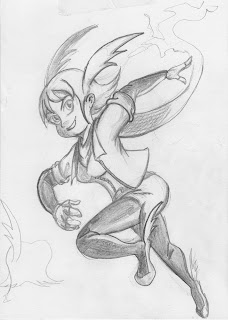 The first sketch needed to show the offset influences I had in re-creating this character. And there were many to--
Wait... recreate? Wasn't this character ONLY created a month before?!
Nope! "Mercury" was originally conceived back during my freshman days in high school. -well, one of the better days I hope- There was an English assignment our teacher gave the class where we had to draw out multiple Greek or Roman gods and goddesses after reading a few passages on Greek and Roman mythology. I chose Mars and Mercury and since Mars was the God of War, I portrayed him as an explosive weapons monger with no mercy only towards his own purpose and people! The War on Terror was big news at the time, folks; don't blame me.
Next, I drew Mercury. Believe it or not, my loose sketch of Mercury above is almost exactly the way I drew Mercury back then. Of course, there are a couple of differences. One, I drew much better at 24 years old than I did at 14 years old! And two, -most importantly- the character's a woman now.
﻿ 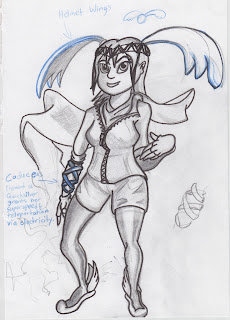 More based this time off of the Greek god Hermes, Mercury's Caduceus device (which is normally a staff in mythology) contains the element of Quicksilver that grants her the power of super- speed, teleportation and duplication via electricity. As seen in the sketch above, I wanted to keep the wings that sprouted out of her hair after the power grant, but in the more finalized design below they were ditched in favor for a tiara that lights when she is at maximum speed! ﻿ 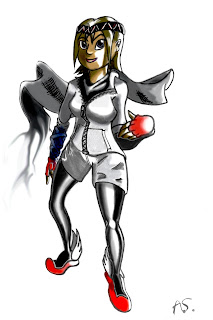 By the end of 2013, I was diving more into using ink-on-watercolor as my medium of choice to replace the digital paintjobs of Photoshop. With that said, Mercury was a prime target for me to test this out on! So in March 2014, I did.﻿ 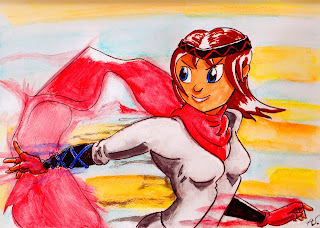 As you can probably tell, her scarf is now a bright carmen red as opposed to the dark grey used in the design before and her figure is now a bit more defined. If I had to guess, the anatomy studies I had lying around in my older flashdrive came out in full bloom when I drew this poster.﻿ 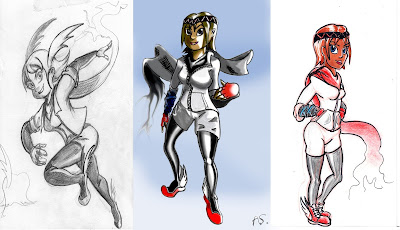 The image above shows the progress of how this character was recreated throughout a full year and provides the point of this post. Within art, it's always about the timing and connections. Had I not felt the need to recreate a couple of characters to become B-List villains for SolForce, I would've continued to draw every other one I've redesigned since 2013. And thanks to my short- lived period in grad school, I shared my work with many impressionable art students. I never looked for praise or perfectionism with my work, since I tend to have a rather specific style especially within cartooning. Nevertheless, most people were blown away enough to realize that I created all of these characters and stories on my own. And then, they would point me to references that would help redefine my designs! I ended up doing the same. 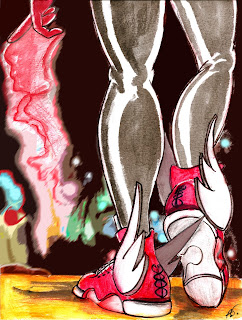 This concludes this weeks' spiral into memory lane on how my character design process works on those bought back from the sketchbook grave! Her name was always Mercury, but in one story she'll be dubbed 'Salted Caramel'. Don't count on me to tell you why right now.
If you liked this post, maybe I'll describe how another SolForce villain came back last weekend in my Moleskine journal in a future post...﻿ 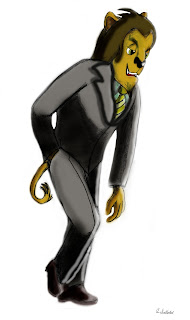 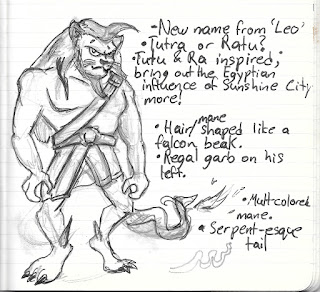 Posted by Aaron Southerland at 12:29 PM No comments:

One day in April 2015, a fellow Academy of Art colleague Alan Tsao asked me something peculiar during a short photo-shoot:

"So, I'm taking a Documentary class next semester. And since we've worked together a few times while you were still in school, I'm thinking. I want to make a documentary based on you!"

My first response was to look at him with a raised eyebrow and devilish smirk. Of all people you want to make a documentary on, why me?! According to him, it's thanks to my sudden return to San Francisco last year to take on a teaching job all the while continuing my upstarting art career.

I find this documentary's existence as somewhat surreal. Maybe it's my obscene modesty, but I never felt that my livelihood during my mid- 20s would be important enough to capture on camera. Last year was truly a twisted spiral on my taking on more of an "adult life". And yet, the completion of SolForce: Wave One by June and my attendance to the Independent Author's Book Expo in New Jersey in last October helped keep my artistic spirit alive.

What helped even more? The two Cartooning classes I pitched to my organization were successes! Now I have something of a fan club with elementary school students. 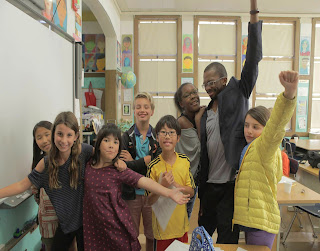 Thanks to film major maestro Alan Tsao, you folks can now get a 10 minute glimpse into how 2015 spun my upstarting art career upside down!

Oh, & some of my students make an appearance. Beware.

Posted by Aaron Southerland at 11:08 AM No comments: