There are many times in which the Winds of Fate will pull you in a direction that doesn't quite meet your game plan. Usually, it's by nature that we all will plan against reality since we believe it's ALL in the palm of our hands.

Thankfully, that's not the case!

Once my two Cartooning classes were underway in autumn of 2015, I dipped my bare cold feet into rather warm water. Both classes were composed of deeply impressionable elementary school students, all of which had either an inkling or fine reasoning as to why they wanted to learn the ways of the Cartoonist. Take it from this slim fit jazz buff; I was impressed.

While my K- 2nd grade group took a few weeks to warm up to my existence, my 4th- 6th grade group couldn't help but peek at my book projects -especially SolForce- at least once a class for inspiration. Midway though the semester, I noticed that I was slowly but surely giving the students revised character designs, story ideas and even comic titles! Of the ten students, only a few of them produced concrete ideas to take them a step further.

Allow me to introduce you to two of my Cartooning proteges: Jenna and Alice!! 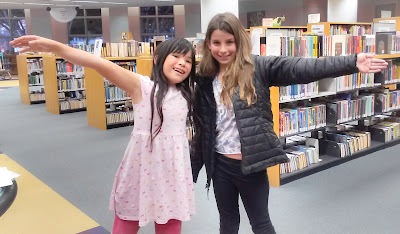 Starting out as close friends since the 1st grade -their words, not mine-, Alice and Jenna joined my first Cartooning class already in love with three things: animals, magic, and comedy. When asked on the first day of class what were their favorite comic or cartoon characters, both replied Calvin & Hobbes; I almost teared up. Oddly enough, talking with them both together made me consider how much in common they have with my 5th grade- self. In the olden days of my youth, Pokemon, Harry Potter, and SpongeBob SquarePants were my pop culture obsessions. They ended up having a huge pull on my art style and storytelling, just as much as the Looney Tunes, Pink Panther and Garfield comics had on me since I picked up the Crayola crayons in pre- K.

Working alone for the first seven weeks of class, Jenna created an assortment of animal characters for a household setting that included a trouble-making beagle, a wildly sweet cockatoo and a shy kitten. Me and her often debated on names; the cockatoo's name being Snowy was fitting, but Spot for the beagle I thought was too... common! So, I suggested a name with more weight on it like Magnus! Jenna brings that incident up every chance she gets. Oh, the hilarity. 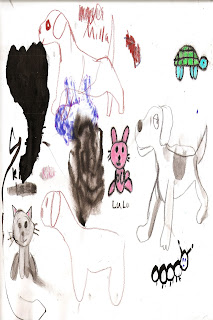 Alice created characters more for the forest. Her first was a rascally rabbit named Flora. The others were a wildcat, a bluejay bird and a fish that I redesigned as a mud-skipper. Look; when I meet anyone of any age with a genuine love for animals, I try to expand to expand their vocabulary even if the next sentence is "I DON'T WANT HER TO BE A DOG. SHE'S A PUPPY!" 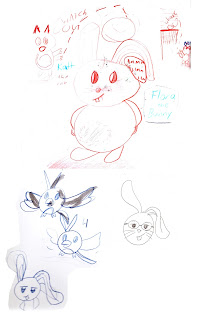 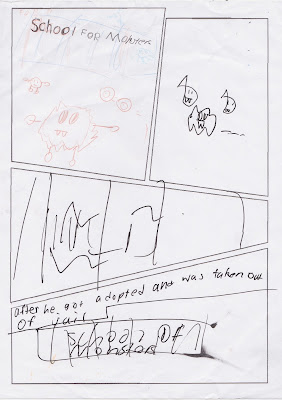 Yes. Within 40 minutes, this character concept and story summary were drawn and written by them! What I managed to get out of them was this: there's a school of monsters that all look and act similar, but out of the blue an evil sorceress casts a spell on them all which causes the monsters to mutate with differing animal body parts. Now, they embark on a quest to find that sorceress to reverse the spell!

Huh!.... The idea hooked me, especially for a comic that can have continuing stories. So, I told the girls that I'm taking home their summary and character for some editing. -they hate that word, by the way- Later that Thursday night, this ended up being the revised summary and character design. 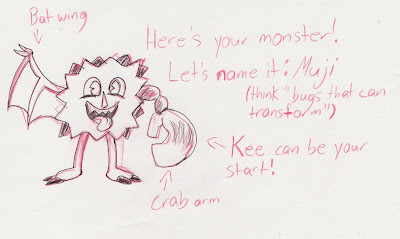 At first, I thought I took too many liberties with the character design. "How can two 4th graders draw something like this?!" I thought in the WAY back of my cynical adult brain... But after witnessing the passion Alice and Jenna had for creating something original and telling a story, all of those doubts were dropped that night. And I even helped give the monster species a name: the Muji. The main character I thought should have a name that's youthful and connecting like its creators, so I named him Kee! His circular spiked body type and bat wing- crab arm fusion served as the basis for the Muji designs.

Next week, I presented them the revisions... and their excitement flew sky high. Within minutes, we were drawing out comic thumbnails! As a parting gift for the semester, I drew them a visual concept of the Muji comic: 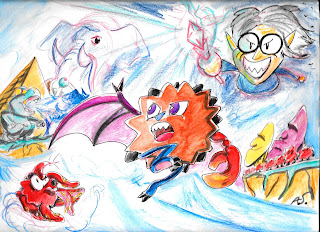 This, of course, led Jenna to asking a very peculiar question when all of the other students left the room: "Can we, like, make this into a book like your stuff?!"

I looked at her mom with a big smirk and asked "When can we start?" 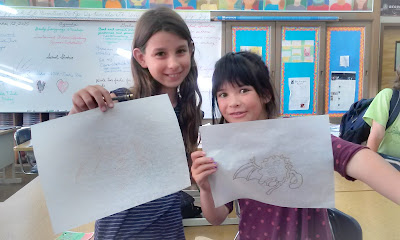 Folks, this is what led to Alice and Jenna being my "first clients" in comic creating. After a few weekend classes thanks to their mothers, Margot and Noelle, and another full ten week semester, I'm happy to present their first book, The Muji Story! 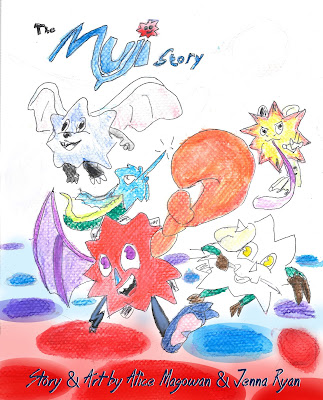 Donned with 24 black and white pages, the three- chapter book follows the band of parasite- like creatures that after exposed to a hex casted by Ali- Tabada, an evil sorceress-in-training, mutate as combinations of animals, and now must find a remedy to reverse the hex!

The Muji Story, according to the duo, was only the beginning. Over their summer break, not only do we plan to work further on "Book 2" of the Muji series, but they're also joining me at my first book expo in the Bay Area: the Bay Area Book Festival!! We'll be located in Teen Town, since our projects are all- ages graphic novels. I'm beyond excited to see what the future has in store for my students and I.

Or... just call us "AJA" if we're all spotted together. 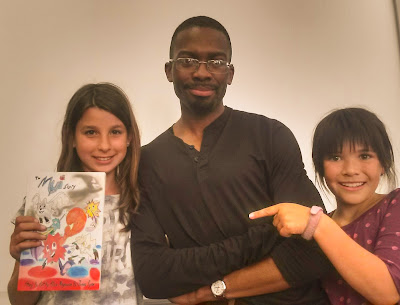 Posted by Aaron Southerland at 3:36 PM No comments: